A Touch of Love
Hands-on Healing for the Animal Kingdom

This lovely article demonstrates just how effective TTouch can be on aggressive cats - it is not just used on dogs.
​ 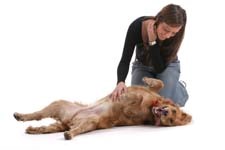 ​Our two new barn cats sat inside their oversize traveling crate, surveying the view of this next chapter in their lives. After a full day chasing mice and exploring the great outdoors of the ranch, they’d retreated back into the security of their “home” to rest.

Ashes already followed us around like a puppy and repeatedly flopped onto his back asking for belly rubs. His aptly-named twin sister, Majestic, remained aloof. In the interest of equal treatment, I reached into their crate and trailed my hand softly down her stiffened back before picking up their empty cat food bowl.

Just as I turned to walk away, Majestic attacked. She bit me hard on the back of my leg and leapt onto my back, sinking her claws and teeth deep into my skin before racing away to hide.

I was stunned. I didn’t know anything about cats, but I’d enjoyed training horses over the years, had cared for many other creatures and certainly thought I had a way with animals. Majestic had been vaccinated against rabies, so I assumed her aggression resulted from territory or distrust issues. But whatever the reason for her behavior, it just wouldn’t do.

After cleaning and dressing my wounds, I web-surfed various problem-animal sites. Especially intriguing was the “Trust Touch” (TTouch) therapy and training work of Linda Tellington-Jones, practiced by more than 1,400 certified practitioners in 26 countries. As the website, TTouch.com, explained, TTouch treatments focus primarily on a series of clockwise circular motions of varying pressures, performed by pushing the skin with the fingers.

My interest piqued, I scheduled an appointment with the certified practitioner nearest my California home, Barbara Janelle in Santa Barbara. We would practice the basics on her cat—I wasn’t prepared to catch and transport Majestic. Janelle explained that aggressive behavior is an instinctual response to fear, and that the TTouch technique rapidly eases fear, distress and pain. She assured me the technique would allow me to provide better care for all the animals I work with, aiding in their training, increasing their contentedness and confidence, and serving as a potentially life-saving method of calming an animal in an emergency.

A few days later, Janelle warmly greeted me at her door and ushered me into her living room. We sank into deep, soft chairs to discuss her long history working with animals, including the past 22 years teaching clinics and numerous seminars.

Janelle demonstrated several TTouch treatments on Magic, her 17-year-old black cat, including an “Ear TTouch” that would help me to relax Majestic. She explained that a cat’s ear contains 397 acupressure points that affect every major system in its little body. Janelle also demonstrated the “Clouded Leopard” TTouch, named for a Clouded Leopard at the Los Angeles Zoo whose aggressive behavior was successfully treated with that particular therapy. I learned how to rest one hand “as light as a cloud” on Magic’s shoulder, curving my fingers slightly while placing the flat pads of my fingers on his skin, then pushing his skin in a circle rather than sliding or rubbing my fingers against it. Meanwhile, I supported the cat gently with my other hand, to help hold him still. Janelle reminded me to relax and keep breathing, pointing out that when I held my breath, so did Magic.

When Janelle recounted how she has also applied the technique to friends and associates with great results, I rolled up my sleeves to show her my rather severe case of poison oak. She walked to the kitchen and returned with clean towels, which she wrapped around my swollen and blistered arms. Working through the protective cloth, she began a series of barely perceptible “Raccoon TTouch” circles, using the very tips of her fingers and fingernails to push my skin gently, in clockwise circles, over and over again, moving slowly in rows up and back down my forearms. Within minutes my taut skin softened and the swelling began to decrease considerably, easing my pain and at least slightly soothing the intensity of the itch. Perhaps another type of massage would provide similar results. But whatever Janelle was doing sure seemed to work, and I liked it.

“We’re talking to the body,” Janelle explained, “saying, ‘Hey, let’s get your act together, start healing this area.’” She said that although formal studies on humans are still pending, decades ago—early on in the development of the TTouch technique—Tellington-Jones discovered that her method helped people in the same way that it seemed to benefit animals.

“We began to recognize we were working with the intelligence of cells,” Janelle explained, “and that this circular touch activates cellular memory, helping bring back normal function to damaged areas.”

In the weeks after Janelle’s demonstration, I devoured several of Tellington-Jones’ 13 books and began experimenting with TTouch on our cats, baby horse and my husband Victor (on a trip to the emergency room for stitches). I wasn’t sure if the circles themselves were responsible for the good feelings in our little family, or if it was just the extra love and attention. Perhaps all Majestic needed was to grow accustomed to us, but after a few TTouch sessions she quickly became as fun, trusting and playful as her brother.

As Tellington-Jones tells it, her work is largely informed by human-potential pioneer Moshe Feldenkrais. While attending a four-year course at his institute in San Francisco in the 1970s, “A statement made by Moshe Feldenkrais electrified me,” she says. “[He said] that by using non-habitual movements that would activate unused neural pathways to the brain, it is possible to improve learning potential.” Already an accomplished horse trainer, Tellington-Jones began applying Feldenkrais’ teachings to her trainees.

The book Man on His Nature, by British physician and Nobel Prize winner Sir Charles Sherrington, instigated Tellington-Jones’ next turning point. “Sherrington’s belief that ‘every cell in the body knows its function within the body and its function within the universe’ had a profound influence on me,” she says. “I began to see the body as a collection of cells and was struck with the idea that by touching the body gently I could allow the cells in my fingers to convey the message at the cellular level to ‘remember your perfection’ in order to activate the healing potential of the body.”

By adapting and applying the various techniques she learned, Tellington-Jones gained considerable notoriety within the equestrian world in the ’70s and early ’80s. Then, in 1983, while demonstrating on a cranky mare at a veterinary clinic, Tellington-Jones was struck with an intuitive impulse to begin pushing the mare’s skin in small circles—a departure from her more complex Feldenkrais-based approach. “When I saw the effects on this mare, I realized that there was something special in the circular movements that anyone could learn. I began experimenting with a variety of circular movements,” Tellington-Jones says. What has emerged over the ensuing decades she calls Trust Touch.

Dr. Stephanie Cote, a veterinarian in Ontario, Canada, incorporates TTouch into her work daily. “Especially in my job, where my patients are frequently scared and concerned about having something painful examined,” she explains, “I am constantly asking myself, ‘How can I make this easier for them?’ TTouch is always a part of the answer.”

Dr. Kerry Ridgway, a noted equine veterinarian based in Aiken, South Carolina, often recommends TTouch as a preventative or follow-up therapy to his clients. He contends that, “Love and caring expressed by touch and intent promotes a sense of wellbeing, stress diminishment, confidence and a diminishment of fear that set the stage for mind and body healing.” He adds that, “The results of Linda’s work cannot be placed in the mold of ‘evidence based medicine’ through double blind studies. However, like acupuncture, TTouch should be considered ‘proven to be effective’ based on the thousands of case studies and the empirical results that accompany them.”

Art Goodrich practiced TTouch at the world-famous San Diego Zoo, where he served as master zookeeper from 1973 until his retirement in 2000. He remains an avid proponent of TTouch today. “I have used TTouch on everything from aardvarks to zebras,” he says. “Giraffes especially enjoy the relaxing of the muscles and the relief of painful areas.” He says that all the animals he handled received a measure of TTouch, and, “They all loved it and wanted more.”

Now in her late 60s, Tellington-Jones says she is looking forward to the publication of her next book, this time focused on TTouch for humans.

“We don’t understand why TTouch works so effectively to reduce pain and fear,” Tellington-Jones says, “but the results have been so positive in hospitals and for individuals working on themselves.” She notes that TTouch is now included in coursework for a minor degree in Complementary Healing Modalities at the University of Minnesota.

When asked what brings the most meaning to her lifework, Tellington-Jones explains, “I feel like I’m an animal ambassador here to speak for the animals and remind their people of the many gifts our animals bring to us. Animals are often thought of as a part of our recreation, but for so many people, especially living in cities and disconnected from nature, I believe our animals play an important role as a means of re-creation, in a special way bringing us closer to nature and our Creator.”

(For information on TTouch in South Africa www.ttouch.co.za)

Catherine Gallegos serves as editor-in-chief of Novica.com (part of the National Geographic family), a retail site featuring the handmade creations of artisans worldwide